My Conifers Are Losing Needles! Should I Be Concerned? Are your evergreen conifers dropping needles? It’s understandably concerning when you see it happening but it doesn’t necessarily mean there’s anything wrong with them. While you may think that “evergreen” means just that, in fact, all evergreens regularly shed needles. In this article, we’ll explain what’s normal when it comes to needle loss in conifers, why it happens, and when to be concerned

What does “evergreen” mean?

The distinction between deciduous and evergreen trees is essentially this:

Note: Confusingly, there are also deciduous conifers! Dawn redwood (Metasequoia glyptostroboides) and the European or common larch (Larix decidua) are two familiar examples of deciduous conifers, and there are others. But for this article, we’ll be talking about evergreen conifers. 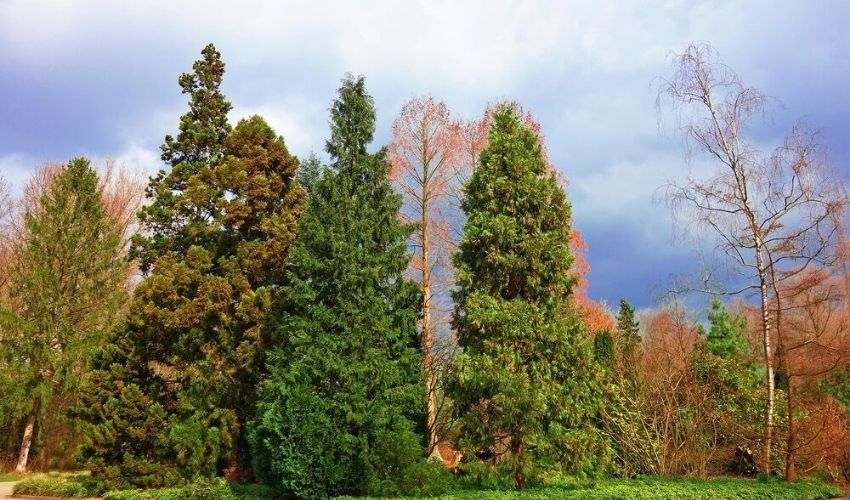 What are evergreen conifers?

Spruce, pine, white-cedar, redcedar, and fir are examples of evergreen conifers that you are probably familiar with. These trees are most noticeable in winter when their color and dense canopies stand out among the bare branches of deciduous species. They also act as valuable windbreaks during winter storms, among many other benefits.

These trees produce needles. And, although they’re “evergreen”, they also drop needles each year. The difference between deciduous and evergreen trees is that evergreens drop needles in cycles that are generally longer than one year. A rule of thumb is that conifers drop needles three years after they produce them. However, some hang on longer and some drop their needles sooner.

Each fall, you’ll find dropped needles from your evergreen conifers. This is normal, and not a cause for alarm.

PRO TIP: Want to learn more about conifers? Ohio State has conifer ID information, and the American Conifer Society has a list of all the conifers you’ll find in the U.S.

What to know about dropped needles

Trees shed their oldest needles. These are generally found throughout the interior of the trees’ crown where the branches are older. Because of this, you may see yellowing or dropping needles from the top of your tree down to its lowest branches. While seeing dead needles throughout a tree may be worrisome, it doesn’t automatically mean that your tree is stressed or dying.

New needle growth happens at the ends of branches. If this young growth is healthy, these needles should stay green.

When do evergreen conifers shed their needles?

Evergreen conifers shed needles each year, but when it happens and how many needles are dropped varies by conifer species. Most trees start shedding old needles in late summer and continuing into fall; for others, it happens during spring and summer. Below is the normal appearance for common conifers in northeast Ohio. What else can cause needles to fall?

Browning or wilting foliage (and subsequent foliage or needle drop) on both deciduous and evergreen tree species can be caused by excessive heat, drought, and water stress. You may find this stress-caused damage throughout the tree but it’s usually found at branch tips. This is the area of the most recent growth and normally stays green. However, when stressed by heat and drought, many trees turn off their energy supplies to the fast-growing new twigs, branches, and foliage.

While supplemental watering won’t bring back browned or dead foliage, it will help your trees by reducing their immediate stress and helping them to resume normal growth. You may notice dead needles falling off but, with proper watering, should see new growth emerging from the branch tips.

When to call the professionals

If you’re concerned about your conifers shedding needles, take the time to examine your trees. If you see any of the following, it may be a good idea to call a Certified Arborist for an evaluation:

Because conifer needles are designed to live for more than just one season, they often have a waxy, protective coating, or a tough exterior. These protective characteristics can also make it harder to identify pest or disease damage, as it may be a year (or two or three!) before the damage shows up in the form of yellowing or brown needles. A conifer can be declining long before you’ll notice its symptoms, making regular inspections an important part of ensuring their long-term health.

We spend our days taking care of trees and are invested in their health and longevity. Experience tells us that the sooner a struggling tree can be treated, the better its chances are for living a long life and reaching its mature size and shape.

Conifers are a unique group of trees that have particular growth patterns and particular pruning requirements, and pests and diseases that attack them can be harder for homeowners to notice because of their foliage. As Certified Arborists, we’re trained to identify insect and disease issues, and are familiar with the natural cycles of needle growth and shedding.

So don’t hesitate to give us a call if your conifers don’t look right. And if it turns out that your trees are just shedding their needles naturally, you can rest easy knowing that they’ll continue to grace your landscape for a long time to come.